AMSOIL Signature Series and Mobil 1 are two of the best motor oils out there. So, which is better? We... 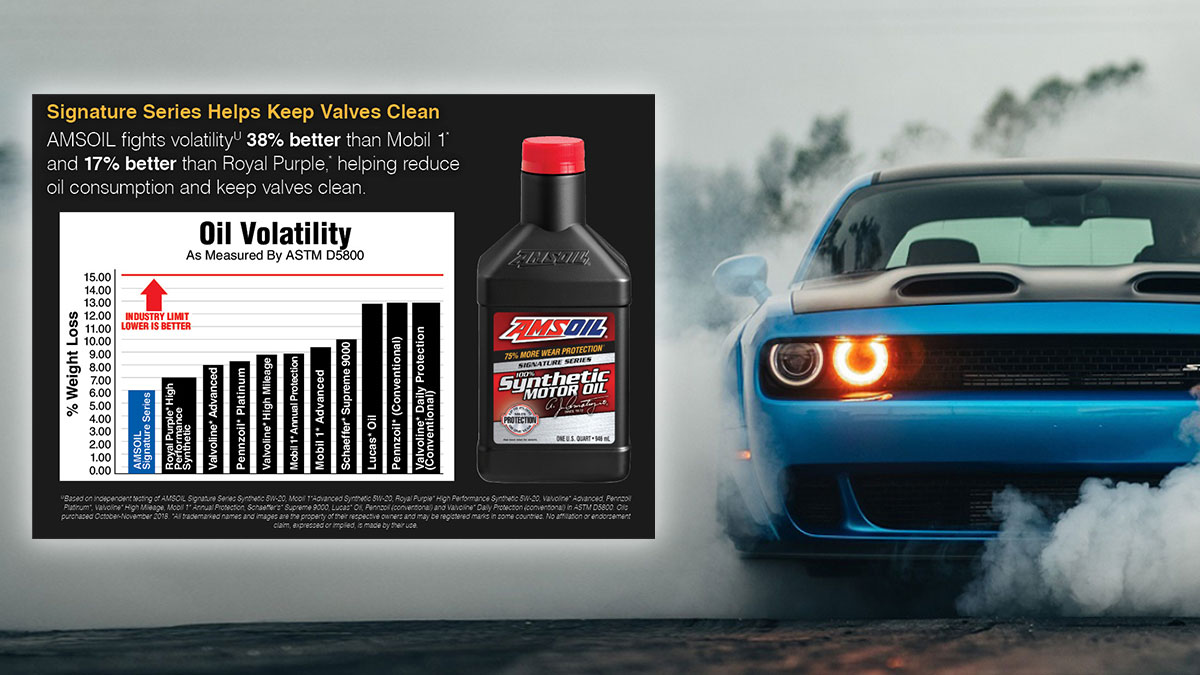 Enthusiasts love to modify their vehicles to make more power. Lists of top-10 mods often include nitrous, a performance exhaust, an engine tune, upgraded intake and more. But they never include upgrading your motor oil to handle all that power. Let’s look at why you should upgrade your oil – and how two of the best available stack up: AMSOIL vs Mobil 1.

Horsepower riding on a sheet of paper

Your engine – and the time, money and effort you’ve poured into it – rely on an oil film that’s thinner than a sheet of paper.

Adding horsepower increases rpm and engine stress, placing even more stress on the oil. Many enthusiasts make compensatory upgrades to the crank, pistons, cam and bearings to handle the additional pressure.

The shear importance of oil

In this scenario, upgrading the motor oil is often overlooked.

But it’s an important consideration since engine upgrades can increase shearing forces, which result in viscosity loss. And viscosity is the most important property of oil.

Find out: What Does Viscosity Mean (and How Does it Affect Your Engine)?

Shear (often called mechanical shear) occurs when one layer of oil moves in the opposite direction of another layer of the same oil.

A great example occurs between the piston and cylinder wall. These two oil films move in opposite directions under intense heat and pressure. This is why high-horsepower, high-rpm engines create increased possibility for viscosity loss due to shear.

If the oil loses viscosity due to shear, it can fail to provide the required level of wear protection. Think of the force transferred through the piston, rod and crank to the thin oil film protecting the bearing. There’s not much room for error.

AMSOIL vs Mobil 1: The results

AMSOIL also does a better job resisting volatility, which refers to an oil’s tendency to evaporate in the presence of extreme heat. Powerful forced-induction engines modified to shred the pavement make intense heat, which can cause inferior oils to breakdown, creating harmful engine deposits that reduce performance.

Here again in the AMSOIL vs Mobil 1 debate, AMSOIL comes out on top, fighting volatility 38% better.

How about engine cleanliness? A clean engine is a more efficient, longer-lasting engine. And, after pouring your time and hard-earned money into your vehicle, you expect it to last.

An oil’s total base number (TBN) is a measure of its ability to neutralize harmful acids that lead to engine deposits. When we pit AMSOIL vs Mobil 1 in TBN testing, AMSOIL delivers 28% more acid-neutralizing power than Mobil 1 to help your engine stay cleaner, longer.

To be sure, Mobil 1 is a good motor oil. If you’ve upgraded to Mobil 1 from conventional oil, congratulations on choosing better engine protection.

But, as the results of industry testing show, AMSOIL Signature Series Synthetic Motor Oil emerges victorious in the AMSOIL vs Mobil 1 debate. Give your engine the best protection you can – give it AMSOIL synthetic motor oil.