SABER® PROVES ITSELF IN STIHL® TRIMMERS

Professional-use string trimmers, mowers, backpack blowers and other equipment can run continuously in hot, wet and dirty conditions for months... Professional-use string trimmers, mowers, backpack blowers and other equipment can run continuously in hot, wet and dirty conditions for months straight. In these conditions, equipment can wear out seasonally, representing the perfect environment for putting AMSOIL products to the test.

Get the SABER’s edge

Before the 2016 summer landscaping season, we purchased three new STIHL FS56RC string trimmers and gave them to Duluth Lawn Care, based in Duluth, Minn. The company relies on a fleet of professional-use mowers, string trimmers and other equipment to provide fast, high-quality lawn-mowing and other services to its 4,500 clients. Historically, the company accumulates about 600 hours per season on each of its string trimmers prior to replacement.

Each trimmer accumulated approximately 600 hours – far more time than the average homeowner puts on a trimmer. After the season, we disassembled the trimmers and checked for wear, carbon buildup and other distress. Select results are shown here. 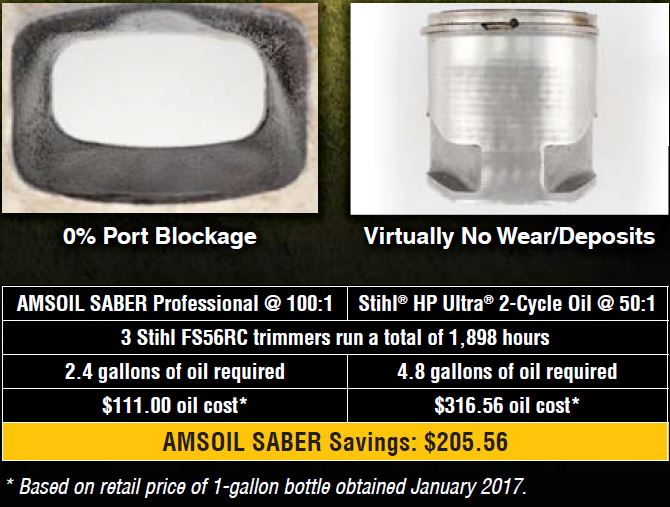 After a full season of severe-service at mixed 100:1, AMSOIL SABER Professional…

Heavy carbon build up can be a problem in professional-use equipment. Oils with poor detergency allow carbon to form in the piston ring lands, on the piston crown, in the exhaust port and on the spark arrestor screen. Carbon chokes off airflow through the engine, robbing the engine of power. It also causes the piston rings to stick in their grooves and fail to form a tight seal against the cylinder wall. The engine loses compression, leading to power loss. This adds up to frustrated workers in the field who can’t work as quickly or efficiently as they need to complete jobs on time and up to standards.

Duluth Lawn Care also saved money on total oil cost. Mixing SABER Professional at 100:1 saved them 65% compared to the cost they would have paid had they used the original equipment manufacturer oil at the conventional 50:1 mix ratio.

Given SABER’s excellent performance, we reassembled the trimmers and returned them to Duluth Lawn Care, allowing the company to use its trimmers longer than historically possible with other oils.