The turbocharger/direct fuel injection combo has emerged as automakers’ favored choice for producing powerful engines and meeting government fuel-economy requirements. The increased airflow turbos generate enables an engine to burn more fuel and produce more power, but this power comes at a cost. The tremendous heat and stress turbos create cause some oils to break down and form harmful bearing deposits through a process known as turbo coking. Over time, turbos can suffer reduced performance or fail altogether.

How Turbos Could Slow You Down

The deposits common to turbochargers can lead to:

The Turbo Coking Test was designed to simulate the extreme operating conditions of a turbocharged engine. It evaluates a motor oil’s ability to resist deposit buildup in the oil passages and bushings of a turbocharger. Temperature increases within the turbo and the weight of any deposits are recorded. 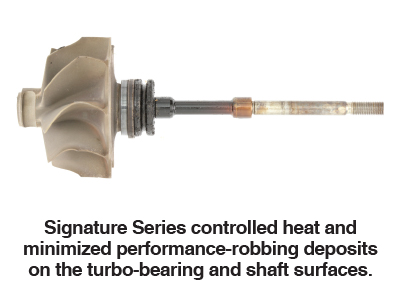 The GM Turbo Coking Test requires an oil to limit the temperature change within the turbocharger to 13 percent or less to pass the test. Signature Series limited the temperature increase to only 3.6 percent, controlling heat and proving it protects against deposits common to high-temperature engine environments.

1Based on independent testing of AMSOIL Signature Series 5W-30 in the GM Turbo Coking Test as required for the GM dexos1 Gen 2 specification. How is Motor Oil Tested?