The Pinnacle of Performance

The new Signature Series Synthetic Motor Oil formulation builds upon its rock-solid foundation to offer enthusiasts a new level of... 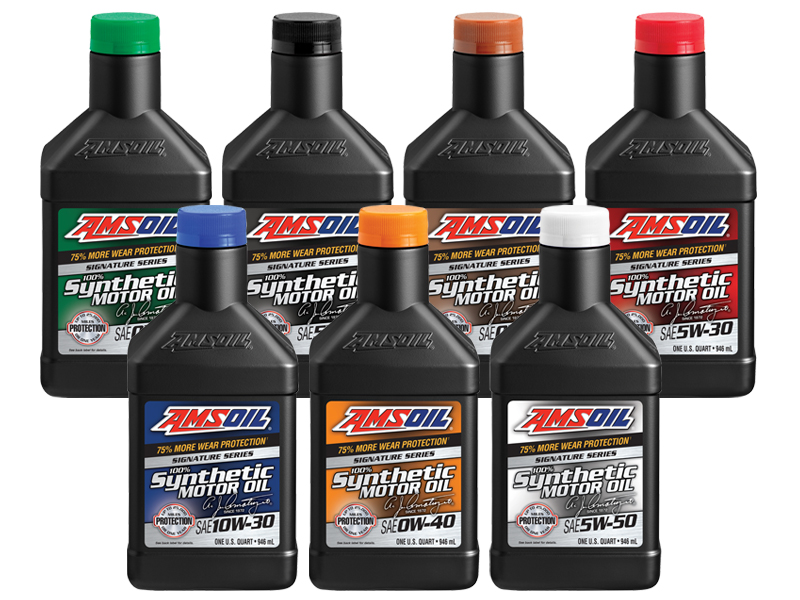 Improving Signature Series was a challenge, but the results prove the new formulation blows the doors off the latest industry standards. Capitalizing on its firmly established success, our upgraded Signature Series Motor Oil provides enthusiasts with maximum protection and performance. The new formulation will become available in September or when current inventory is depleted.

We armed Signature Series with an advanced detergent system to protect vital engine parts like pistons and connecting rods. Most new engines feature gasoline direct-injection (GDI), often combined with a turbocharger to boost power and improve fuel economy. These new technologies pose significant challenges to motor oil, one of which is the advent of low-speed pre-ignition (LSPI). LSPI is the spontaneous ignition of the fuel/air mixture prior to spark-triggered ignition. It occurs in today’s advanced engines and is much more destructive than typical pre-ignition. Signature Series provided 100 percent protection against LSPI in the engine test required by the GM dexos1® Gen 2 specification.

The tremendous heat and stress turbos create can cause some oils to break down and form harmful bearing deposits through a process known as turbo coking. Over time, turbos can suffer reduced performance or fail altogether. AMSOIL Signature Series Synthetic Motor Oil handles heat so well that it protects turbochargers 72 percent better than required by the GM dexos1 Gen 2 specification.4 It enables modern engines to achieve their full potential and service life. Signature Series provides the ultimate protection against extreme heat and the harmful deposits that can plague turbochargers and features the high film strength needed to guard against accelerated wear.

AMSOIL Signature Series Synthetic Motor Oil provides reserve protection, allowing you to go up to 25,000 miles or one year (in normal service) between oil changes if you choose. Its unique synthetic formulation and long-drain additive system are inherently stable to resist oxidation and neutralize acids over longer periods.

Signature Series is designed to deliver outstanding engine protection, cleanliness and performance over extended drain intervals – guaranteed. It provides peace of mind so you can fit oil changes into your schedule, while also reducing vehicle maintenance and waste oil.

Signature Series has a uniform molecular structure that limits evaporation and keeps it where it’s needed most – protecting your engine. Volatility (burn-off) occurs when oil gets hot, causing lighter molecules to burn off or evaporate. Signature Series falls far below the API limit for volatility, reducing the need for frequent oil top-offs and limiting vehicle emissions.