To meet today’s strict motor oil specifications and adequately protect modern engines, motor oils must demonstrate increased resistance to volatility. In 1985, AMSOIL became the first oil manufacturer in the United States to use the Noack Volatility Test (ASTM D5800) as a measure of performance excellence. Today, it’s an industry standard.

Why is Noack Volatility Important?

Modern engines, particularly those equipped with performance-enhancing technologies like direct fuel injection and turbochargers, generate increased heat compared to their predecessors. At elevated temperatures, such as during severe service or when driving in hot summer weather, the oil’s lighter-weight molecules can volatilize, or literally “boil off.” The more volatile a lubricant is, the lower the temperature at which the lubricant will begin to evaporate. The more it evaporates, the less oil is left to protect equipment and the faster a user must replace the lost oil. You may have experienced this phenomenon by owning an automobile that “uses” motor oil in irregular intervals.

Volatility affects more than the rate of oil consumption. When light elements in oil evaporate from heat, the oil’s viscosity increases. This thicker oil forces the engine to work harder, resulting in several problems, including…

The most common method used in measuring oil volatility is the Noack Volatility Test. But that hasn’t always been the case. Originally developed and used in Europe, the Noack test was not commonly used for lubricants until AMSOIL founder Al Amatuzio pioneered its use for automotive motor oils in 1985. Previously, a lubricant’s flash point was the primary way to approximate an oil’s volatility.

In the Noack test, an oil sample is weighed and heated to 250°C (482°F) for one hour. Dry air is passed over the sample, carrying the oil vapors that have boiled off and depositing them in a beaker. The original sample is removed and re-weighed. Any reduction in weight is reported as a percentage lost of the original weight.

When AMSOIL began using the test, it was common for competitors’ conventional oils to demonstrate a volatility loss in the 17-25 percent range. In contrast, the volatility loss of AMSOIL synthetic motor oil was often less than half that. The Noack Volatility Test introduced a new measure of performance to the industry, while allowing AMSOIL to distinguish the performance of its synthetic motor oils from competitors.

AMSOIL synthetic motor oils are more stable and heat-resistant than other synthetic and conventional oils, as the graph shows. They resist volatility to resist deposits and oil thickening, maximizing fuel economy and engine performance and life. 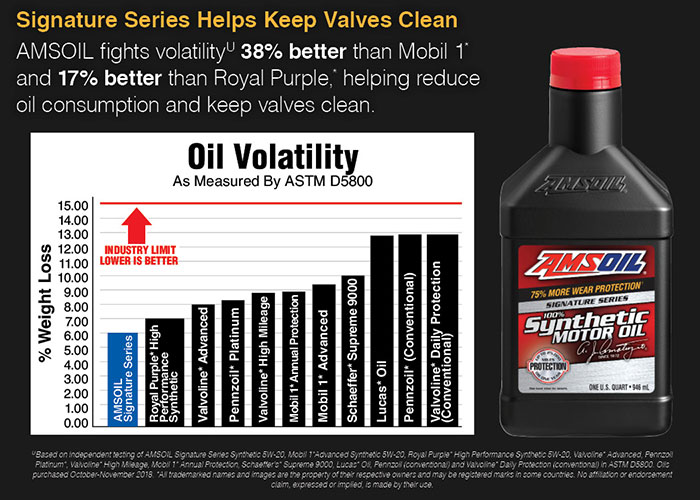