AMSOIL Keeps Trailblazer on the Road 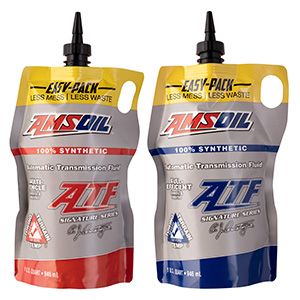 Brett Carlile of Moreno Valley, Calif. said his 2002 Chevy* TrailBlazer* has been dependable as the family’s “truckster” since he purchased it slightly used in 2003.

Shortly after he purchased the TrailBlazer, he started experiencing overheating issues. “I realized I needed the best motor oil available to protect the engine from the damage of ‘excessive heat,’” Carlile said. He researched online and read about AMSOIL synthetic motor oil. “The testimonials and test comparisons to other brands were especially helpful,” he said.

Carlile ordered AMSOIL Signature Series 10W-30 Synthetic Motor Oil for the Chevy. “Immediately after receiving my first order I changed the oil and realized a 2 mpg increase in fuel economy,” Carlile said. He became a Preferred Customer when he placed his second order.

He eventually learned the overheating problem was with the variable-speed viscous fan clutch. “Two years into ownership I received a letter from Chevrolet extending the engine block warranty,” Carlile said. “This engine has an aluminum block with sleeved cylinders, and the cylinder sleeves were cracking.

Carlile said he didn’t worry about the engine because he was confidently using AMSOIL synthetic motor oil. “I am a firm believer in the AMSOIL product line and install it in all of my vehicles and small equipment,” Carlile said.

This Chevy TrailBlazer is still dependable for the Carlile family with more than 200,000 miles (321,000 km) on the engine.

Through the years, the family has made countless trips to Arizona and one trip to Canada. In fact, the old truck is still used regularly as a daily commuter. “Here we are many years later and the old girl is running like a top,” Carlile said. “Annual oil analysis reports show she is doing fine.”

Testimonials are the subjective experiences of our customers and are not intended to be construed as a guarantee that your results will be the same; individual results may vary.