AMSOIL vs. Harley-Davidson Oil: How We Perform

We submitted AMSOIL synthetic motorcycle oil and Harley-Davidson SYN3 oil to independent testing. Who came out on top? Find out... 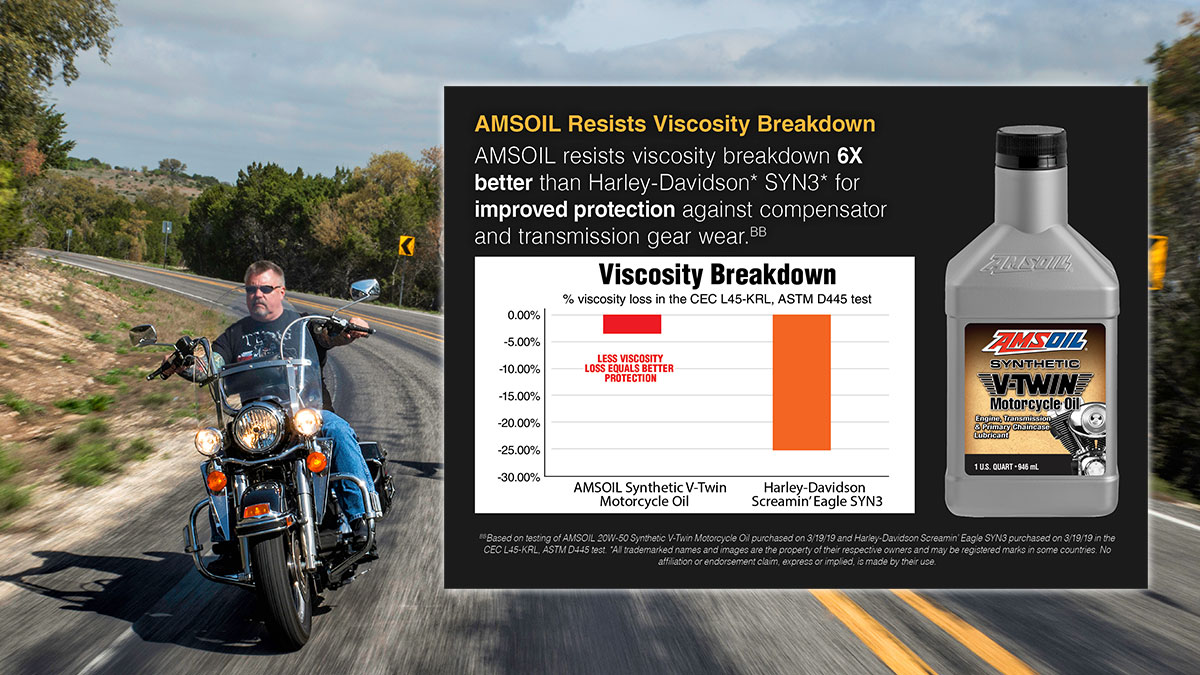 Bikers always want to know how AMSOIL products compare to the competition, particularly against Harley-Davidson oil.

It’s no wonder since Harley-Davidson dominates two-wheeled culture despite the resurgence of the Indian brand and the rising popularity of adventure bikes and everything you can do with them.

The company’s founding is a great story. William Harley and Arthur Davidson built their first motorcycle in a 10×15 shed right here in our home state of Wisconsin. While the duo’s 116-cc prototype bike lacked the power to ascend the hills around Milwaukee, it turns out it had the power to reshape American culture.

But, what about Harley-Davidson motorcycle oil?

To see how AMSOIL Synthetic V-Twin Motorcycle Oil performs vs. Harley-Davidson oil, check out the performance-test results for yourself.

Viscosity is the most important property of a lubricant. While it’s defined as “resistance to flow,” it helps to think of viscosity as the oil’s thickness.

Your motorcycle engine, transmission and primary are designed to use oil of a specific viscosity, likely 20W-50 if you’re riding a Harley. The higher the numbers, the thicker the oil. So, a 20W-50 is thicker than the 5W-20 oil you use in your truck.

Oil that’s too thin for its application won’t form a durable fluid film on metal components. The oil film protects the bearings from wear, helps keep the piston from scuffing against the cylinder wall, protects the transmission gears, guards against compensator wear and more.

In the transmission, for example, the oil must be thick enough to develop a strong fluid film to cushion the gears against shock-loading and quiet loud “thunks.” This promotes smooth, quiet shifts.

It’s the same story in the primary. The oil must protect the compensator from wear to prevent noise. If it doesn’t, you’ll find yourself on your phone reading the glut of content about Harley compensator noise and how to fix it.

The compensator acts like a shock absorber between the engine and transmission, helping prevent engine vibration from interfering with the transmission. When it wears out, it makes a ticking or knocking noise.

Avoiding this scenario seems easy enough – just use a good oil that maintains its viscosity and forms a strong, protective film on parts.

Motorcycle engines, transmissions and primaries can be brutal environments that take a toll on oil. The mechanical shearing action of metal parts churning at thousands of rpm (particularly transmission gears) combined with extreme heat can cause oil to lose viscosity and become thinner.

Oil that’s too thin reduces wear protection and can lead to “thunking” transmission gears and a noisy compensator.

And nothing derails your pursuit of freedom on the open road like a noisy bike.

So, while we love Harley’s rich history of freedom and independence, we’ll stick with AMSOIL Synthetic V-Twin Motorcycle Oil over Harley-Davidson SYN3 oil.