For many drivers, budding trees in spring and changing leaves in fall signal the time for an oil change. If... For many drivers, budding trees in spring and changing leaves in fall signal the time for an oil change. If you ask them why, they’ll likely just shrug and says it’s what they’ve always done.

The reasons are more nuanced than you think. One involves marketing. Another spans 1,500 miles and marked a technological leap for the industry.

The thick and thin of viscosity 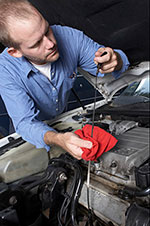 Viscosity is the measurement of a lubricant’s resistance to flow, but it’s easier to think of it as a lubricant’s thickness. Lower numbers indicate thinner oils, which flow better at cold temperatures. Today, motorists are used to multi-grade oils, such as 5W-30. In the early 20th Century, things were different. Motor oil was classified under a monograde designation (SAE 10, 20, 30, 40 or 50) based on its flow rate at 212ºF, or normal operating temperature.

As more motorists began buying cars and changing oil, it became evident that some monograde oils didn’t offer the low-temperature performance engines needed during the winter. So, many motorists adopted the habit of changing from a heavier oil – SAE 40, for example – to a lighter viscosity as winter approached to ease cold starts and ensure better cold flow. In spring, they changed back to SAE 40 since it offered better high-temperature stability for high-temp summer driving.

It turned out that oils formulated from different crude-oil sources behaved differently in service. For example, when the temperature dropped below freezing, an SAE 20 oil refined from crude oil sourced from the Gulf Coast was much thicker than an SAE 20 oil refined from Pennsylvania crude, some 1,500 miles away. Although they were both SAE 20 motor oils and their viscosities were similar once the engine reached operating temperature, the SAE 20 designation didn’t communicate the difference in winter performance.

In 1952, the industry updated its standard to include a set of winter-grade designations denoted by the letter “W.” With the addition, motorists had an idea of how well their oil performed at 0ºF. Soon after, motor oil technology improved enough to introduce multi-grade oils to the market. They offer the best of both worlds – good protection and performance both at startup, when the engine is cold, and once the engine has reached operating temperature. A 5W-30 oil flows quickly when you start the engine, behaving like a 5W oil, while remaining stable at high temperatures, offering the performance of an SAE 30 oil at 212°F.

Although multi-grade oils ended the need for seasonal oil changes, many motorists stuck with their maintenance habits, in some part thanks to reinforcement from others. In the 1960s, marketers promoted the 3,000-mile/3-month oil change to time oil changes with the seasons. The quick lube market picked up the idea as a way to keep traffic flowing, touting it as an “insurance policy” for your engine.

Today, improvements in oil performance have rendered the 3,000-mile/3-month drain interval outdated. But many people still love the symmetry and convenience of twice-a-year, seasonal oil changes.

AMSOIL offers a synthetic oil for whatever oil-change schedule you prefer. AMSOIL XL Synthetic Motor Oil is great for spring and fall oil changes. It delivers outstanding wear protection and engine cleanliness for up to 10,000 miles/6 months.

For best wear protection, step up to AMSOIL Signature Series Synthetic Motor Oil. It provides 75% more engine protection against horsepower loss and wear than required by a leading industry standard*, extending the life of vital components like pistons and cams.

*As required by a leading industry standard. Based on independent testing of AMSOIL Signature Series 5W-30, in ASTM D7320 as required by API SN specification.