What to Look for When Buying a Used Dirt Bike

When buying a used dirt bike, look for these telltale signs that the bike has been used and abused so... 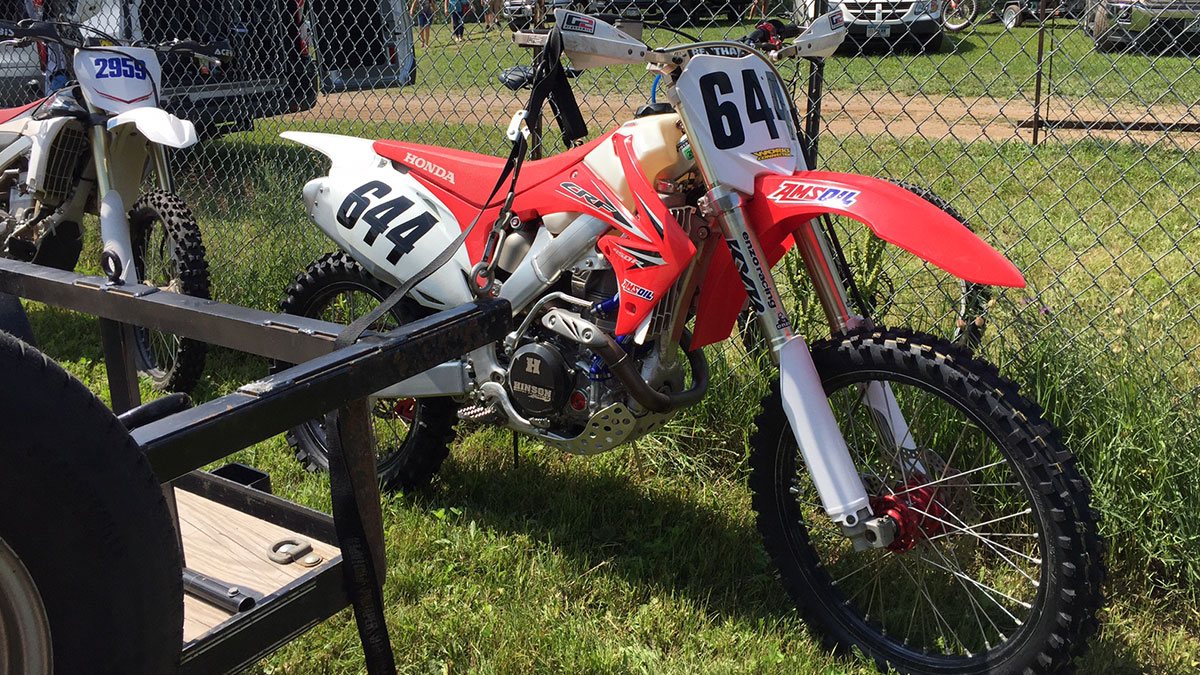 Whether you’re new to dirt bikes or a seasoned veteran, you don’t want to waste money on someone else’s junk. Here, our resident two-wheeled experts offer tips on what to look for when buying a used dirt bike.

Check the hours on the bike

On a two-stroke bike, higher hours come with less risk. Two-strokes can often last two or three times longer than four-strokes. And, while they may lose some power over time, they’re less likely to suffer significant engine damage that requires expensive repairs.

Things are different when buying a used four-stroke dirt bike, however. They typically require a top-end rebuild about every 50 hours. Otherwise, the piston can wear out and cause expensive engine damage. Ask the owner if the bike has been rebuilt. Search online for recommended rebuild intervals. If you consider buying a high-hour four-stroke dirt bike that hasn’t been rebuilt, the price should reflect that; use it as a negotiating tool.

Ask the owner about his or her maintenance practices. How has the bike been maintained? On four-strokes, how often did they change oil? Since dirt bikes only hold about one quart of oil, most riders change oil frequently.

Pull the dipstick and look at the oil, if possible. Look for shiny particles in the oil, which indicate the presence of metal and excessive wear. Particles can indicate a bearing, transmission gear or other component is failing.

This is an important step when buying a used dirt bike.

Push down hard on the seat. The bike should rebound in a controlled manner, not like a pogo stick. Climb aboard the bike and bounce on the seat to ensure it offers controlled dampening.

Inspect the rear shock for oil leaks by looking for oil and dirt buildup at its base. If oil leaks and collects on the shock, dirt will stick to it. A rear-shock rebuild costs at least $100, so keep that it mind if you notice problems. Riders normally can’t rebuild a rear shock themselves because they don’t have access to pressurized nitrogen or the special tools required.

Check the swing arm for excessive play, which holds the rear wheel to the frame. Also inspect the linkage to which the shock connects. Have someone lift the rear of the bike an inch or two off the ground. Try to pull the back tire from side to side to check for lateral movement. Any movement indicates bad bearings or bushings.

This is one of the most abused parts of the bike, meaning it’s something to pay close attention to when buying a used dirt bike. The front suspension absorbs the punishment of mile after mile of non-paved surfaces and catching big air. As such, they require periodic maintenance, which some owners overlook.

As with the rear shock, check for oil leaks. Run your hand over the tubes to check for oil. Look for dirt buildup where oil may be leaking. Examine fork condition, too. The front suspension requires new oil and possibly seals every 50-100 hours, which may run you up to $200 for a rebuild. Check out our step-by-step video to do it yourself.

Examine the tires and wheels

While you’re looking at the suspension, check tire and wheel condition. Dirt bikes go through tires rather quickly, so worn tires can influence your negotiation when buying a used dirt bike. Look for cracks or checking, which indicate the bike isn’t used much or the owner isn’t changing tires often.

Run your fingers over the spokes. They should all be tight and in good shape. Loose spokes indicate the rim is out of true, which could mean the owner hit one too many rocks or other obstacles. New rims are expensive and a possible reason to walk away if you’re not willing to spend the money to replace them.

Listen to the engine & shift through the gears

No inspection of a used dirt bike is complete without starting the engine.

It should start readily and run smoothly. Watch for excessive smoke from a two-stroke, which might take a few seconds to even out after it’s started cold. Listen for any abnormal sounds or loud noises that might indicate piston knock. Rev the engine; it should sound smooth.

Take a ride if you can. This is your chance to ensure the bike pulls well through the gears and shifts smoothly. Ensure the clutch doesn’t slip or grab. You should be able to progressively shift through the gears with no issues and easily find neutral.

A slipping or grabbing clutch is a great diagnostic tool; it can point to worn oil, low-quality oil, worn clutch plates or even a faulty transmission.

Give it a general visual inspection

Walk around the bike and look it over closely. Is the plastic destroyed? That’s an indication the bike was ridden hard and spent too much time on its side. Look at the side cases of the motor where the rider’s boots rub. A lot of wear means the bike has accumulated a lot of miles.

On a two-stroke, look for dents in the expansion chamber, which often bears the brunt of falls. Look for scratches and general wear-and-tear that indicate the bike has been abused. Are the ends of the handles beat up? Again, that indicates the bike has spent too much time on its side.

What size dirt bike do I need?

It’s important to understand what size bike you need when buying a used dirt bike.

Size your bike based on your skill level. If you’re new to the sport, be honest about your abilities and choose accordingly. Don’t buy a powerful 450 assuming you can “ride your way into it.” Too much power and too much bike increase your chances of having an accident and ruining what can be a great hobby.

If you’re new or you’re smaller in stature, lean toward a 125 or 150. A dirt bike of this size is easier to handle, less expensive to purchase and maintain, and often delivers excellent power, particularly modern bikes.

If you’re an intermediate rider or larger in stature, a 250 will provide a frame about the same size as a 150, but with more power.

After you buy your bike, make sure to use a good motor oil to get the most years and best performance from your ride.