Is an Engine Flush Good or Bad?

An engine flush will improve engine performance in most cases, but you may want to skip it with old, high-mileage... 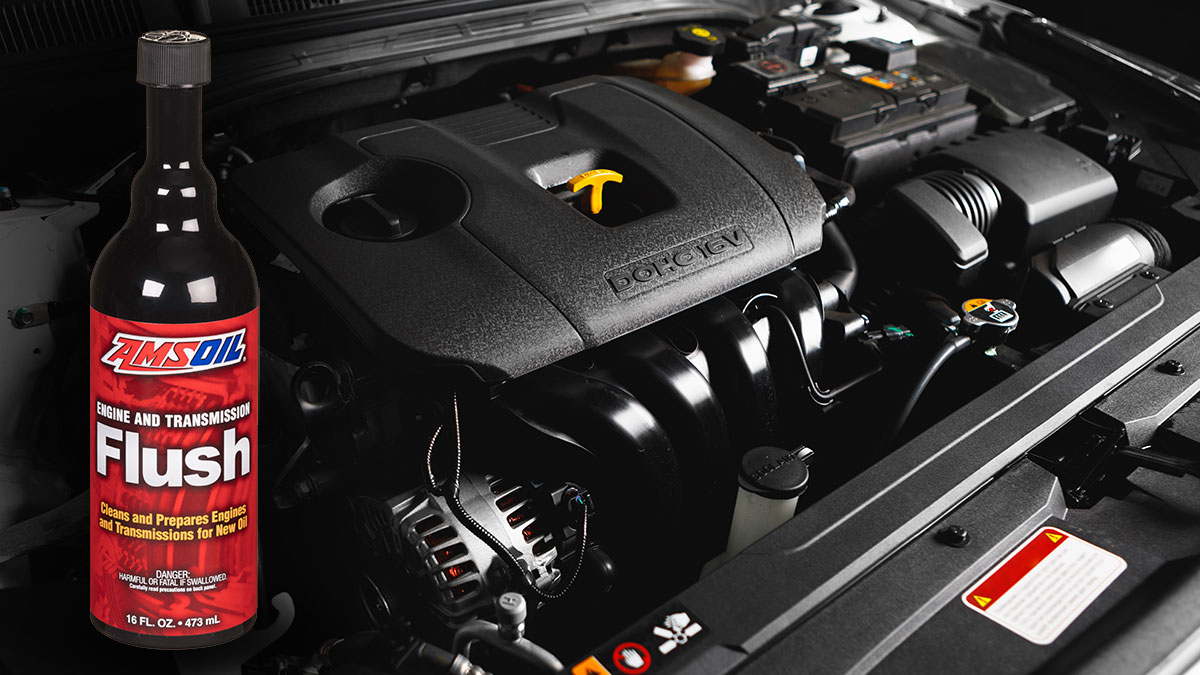 Let’s get right to the point: Is an engine flush good or bad?

Spend a few minutes perusing online forums and you’ll find a range of answers to this question, often involving an old Trans-Am, Camaro or other car that someone thrashed on for years, parked in a pasture for a decade and now wants to revive with an engine flush.

What is an engine flush?

An engine flush is an aftermarket chemical additive designed to clean accumulated deposits, sludge and other gunk from your engine.

You pour it into your engine’s oil-filler port and idle the engine for about 10-15 minutes. It mixes with the oil and circulates through the engine, helping dissolve sludge and clean deposits.

Then, you drain the oil (along with much of the gunk, in theory), change the oil filter, add fresh oil and return to the business of driving.

How deposits and sludge form inside an engine

If it did its job, your engine’s performance will return to the heady days of its youth, when it delivered maximum power and efficiency.

Over time, however, harmful deposits and sludge may have accumulated, causing power and performance loss.

Deposits and sludge can form for several reasons, including…

As it settles, sludge can clog narrow oil passages or the screen on the oil pickup tube, restricting oil flow to vital parts, especially the upper valve train.

Deposits can cause the rings to stick, reducing engine compression and horsepower.

Can engine sludge be removed?

Yes. The proper detergents in the correct concentration can dissolve engine sludge, deposits and varnish.

Ideally, sludge won’t form at all; however, sometimes mechanical issues arise, such as a leaking head gasket, and the formation of sludge occurs.

If sludge does form, the oil’s detergents help dissolve and disperse sludge to clean the engine.

This is more challenging than it sounds.

For that reason, oils contain a limited concentration of detergents (compared to an engine flush product) to ensure room in the formulation for other additives that protect against wear, fight oxidation, combat rust and more.

An engine flush product, on the other hand, is designed solely to clean.

AMSOIL Engine and Transmission Flush, for example, contains nothing but potent detergents, making it a more effective cleaner than motor oil.

Plus, it cleans at the molecular level, ensuring deposits are dissolved and properly exit the engine with the oil when it’s drained. This is important since some motorists fear that an engine flush will free large chunks and cause an avalanche of debris to clog passages inside the engine. AMSOIL Engine and Transmission Flush guards against this scenario.

Is an engine flush necessary?

However, in old engines with high miles, sludge may be the only barrier keeping oil from seeping through worn or cracked seals.

Removing the sludge exposes the seals for what they really are – junk. Soon, your engine begins leaking oil, and your mind instantly associates the engine flush product with an oil leak.

In reality, the seals were already bad; the flush simply revealed their true condition.

If you suspect your vehicle falls into this camp, leave well enough alone and skip the engine flush.

It’s probably not worth trying to revive an engine in such poor condition without first fixing the bad seals or other defects.

In effect, you’re choosing your problem: either sludge and deposits robbing performance or, if you clean the engine, the seals showing their true condition.

An engine flush is part of a good maintenance regimen

But that’s not to say an engine flush is never a good idea.

In fact, it’s often the first step in helping restore a neglected vehicle to top-notch performance. And, often when you buy a used vehicle, that’s what you’re getting – a vehicle whose owner found antiquing on Saturday afternoon more enjoyable than changing oil or dropping the transmission pan. Consequently, your “pre-owned” ride, while not complete junk, may boast a sketchy maintenance record.

In these cases, a potent, detergent-based flush can help prepare the engine for new oil, loosening sticky valves or rings and helping remove harmful sludge.

While not a required step when switching to AMSOIL synthetic motor oil, we do recommend flushing your engine if you want to give your vehicle a fresh start.

5 benefits of an engine flush

1. Prepares your engine for new oil

An engine flush helps loosen sticky valves or rings and remove harmful sludge and other contaminants.

By cleaning the engine prior to installing fresh oil, you ensure the new oil functions as intended and delivers maximum protection. The oil won’t last as long or protect as well if it must contend with sludge and deposits from the previous oil.

By the way, we don’t require use of AMSOIL Engine and Transmission Flush before switching to AMSOIL synthetic motor oil, but we recommend flushing your engine if you want to give it a fresh start.

If deposits in the piston-ring lands cause the rings to stick, oil can migrate into the combustion chamber, where it burns.

This not only leads to harmful deposits, it also increases exhaust emissions as the burned oil exits the tailpipe.

Excessive heat is bad for your engine and the oil.

Extreme heat reduces engine efficiency while increasing the rate at which the oil oxidizes (chemically breaks down). Sludge and deposits act as insulators that prevent the engine from dissipating heat as designed.

This might not apply to every engine flush, but it applies to AMSOIL Engine and Transmission Flush. It delivers results after just one application. And it only takes 10-15 minutes to use.

Plus, you can safely use it in gas or diesel engines and automatic transmissions.

While some solvent-based flush products require a cumbersome disposal process, AMSOIL Engine and Transmission Flush uses a detergent-based formulation. As such, you can dispose of it easily with waste oil.

Engine Flush Products: I use AMSOIL Engine and Transmission Flush

For the record, I’ve used AMSOIL Engine and Transmission Flush on three different pre-owned vehicles in my time, and it’s worked great.

Another, an Oldsmobile Intrigue, ran great until a computer problem forced me to trade it off…for the CR-V.

The third ran great, but I sold it off after it, too, rusted out.

In sum, flush your engine if you want to give your vehicle a new lease on life.

Check out this post to determine if a transmission flush or pan drop is better for you.

But if you have any reservations about disturbing sludge or deposits that may be holding your old, high-mileage engine together, consider skipping it. It’s up to you.

How to perform an engine flush

If you are looking for the best way to flush your engine this weekend, here’s a quick video that will walk you through the process.