Here's why you should always use a motorcycle-specific oil in your bike. Lubricant-additive manufacturer Infineum found that less than 60% of bikers use a motorcycle-specific oil in their motorcycle. Clearly, many riders are unaware of the importance of using an oil formulated specifically for its intended application. In this post, we’ll look at motorcycle oil vs car oil and provide insight into why you should always use motorcycle oil in a motorcycle engine.

Motorcycles, however, run even hotter, particularly big, air-cooled V-twins, like the average Harley-Davidson.* They rely on air flowing across the engine for cooling, which is inherently less efficient at dissipating heat.

This configuration poses additional challenges in stop-and-go traffic when there’s little airflow, especially on hot summer days. In fact, during testing of a 2019 Harley Street Bob* with a Milwaukee-Eight* 107 engine in the AMSOIL mechanical lab, the rear-cylinder temperature surpassed 420°F (216°C).

Heat that intense causes some oils to thin and lose viscosity, which reduces wear protection. High heat also hastens chemical breakdown of the oil (called oxidation), which requires you to change oil more often. In extreme cases, the bike’s temperature sensors can shut down the engine if it gets too hot.

Motorcycles tend to operate at engine speeds significantly higher than automobiles. The average metric sport bike easily eclipses 10,000 rpm. Some have even pushed 20,000 rpm. Your car or truck’s redline doesn’t even come close.

High rpm places additional stress on engine components, increasing the need for wear protection. It subjects oils to higher loading and shear forces, which can rupture the lubricant film and reduce viscosity, both of which increase wear. High rpm also increases the likelihood of foaming, which can reduce an oil’s load-carrying ability, further inviting wear.

Transmission gears can shear the oil as it’s squeezed between gear teeth repeatedly at elevated rpm, causing some oils to lose viscosity. Many motorcycles also incorporate a wet clutch within the transmission that uses the same oil. Motorcycle wet clutches require a properly formulated lubricant that meets JASO MA or MA2 frictional requirements. 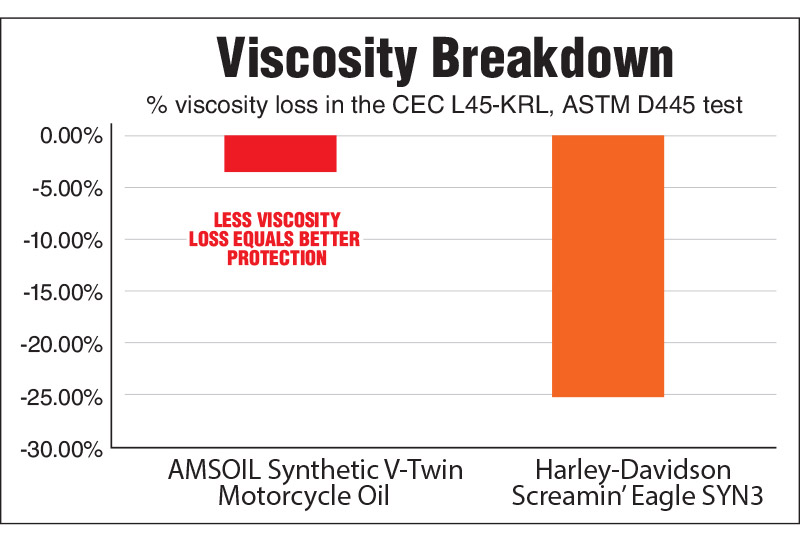 Whereas cars and trucks are used almost every day, motorcycle use is usually periodic and, in many cases, seasonal. These extended periods of inactivity place additional stress on motorcycle oils. In these circumstances, rust and acid corrosion protection are of critical concern.

While a good passenger-car motor oil (PCMO) hits many of these performance areas, it doesn’t get them all.

PCMOs usually contain friction modifiers to help boost fuel economy. Furthermore, PCMOs don’t meet JASO MA or MA2 requirements. If used in a motorcycle, they can interfere with clutch operation and cause slippage. And no rider wants to deal with a slipping clutch.

Likewise, motor oils for cars and trucks have no natural rust or corrosion resistance. Instead, corrosion inhibitors must be added to the formulation, and typical motor oils don’t contain them.

AMSOIL Synthetic V-Twin Motorcycle Oil and Synthetic Metric Motorcycle Oil are designed for the unique demands of motorcycles. They are formulated without friction modifiers for precise, smooth shifts. They also contain a heavy dose of corrosion inhibitors to protect your engine against rust during storage. And they’re designed to resist viscosity loss due to shear despite intense heat and the mechanical action of gears and chains.

When deciding between motorcycle oil and car oil for your bike, the choice is clear. AMSOIL Synthetic Motorcycle Oil delivers the protection your bike needs.